It is an exposition of Pavol Orszagh Hviezdoslav ̓ s writings. He was one of the greatest poets in Slovakia. Here he wrote his best known poem – „Hajnikova žena“ – The Forest ̓ s woman. In his work Hviezdoslav was inspired by beautiful nature in which he set the main characters of Hajnikova žena. It tells the story of a forester and his wife who live happily in their house up to the time when forester ̓ wife is being seduced by a rich villager. This story is about love, faithfulness and human sinfulness. The poem first appeared in the Slovenské Pohľady. The book followed 2 years later. 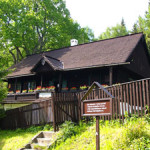 It is the first real literary museum in Slovakia. The exposition was opened to public in October 1979. In this area, there is also the exposure of Milo Urban, a native writer from nearby village Rabčice.